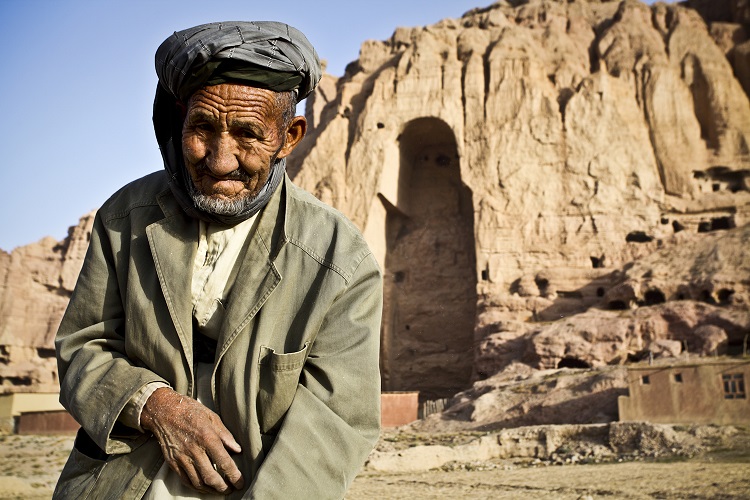 The author did three contracts in Afghanistan in Security Risk Management roles. One for the UN, one for a Faith Based INGO and the other for a government owned development organisation. Opinions expressed below are his alone and do not derive from official policy of his former organisations.

The situation is not close to normalising in Syria. Well in advance of whatever tenuous peace will be agreed upon eventually, we can be nearly certain there will be ongoing state and non-state interference. It will remain a hazardous place for INGO staff, and will continue to be viewed as a source of potential extremists keen to inflict damage in European, American, Australian etc cities. In a triumph of hope over experience, it can be reasonably predicted that the usual suspects (USAID, DFID, EU, DFAT, CIDA) will be throwing vast sums at development organisations to ‘do stuff’ in Syria with a view to reducing the security threat back home and perhaps even encouraging refugees to return to their homes.

The ultimate strategic risk management failure of the last two decades within the Humanitarian and Development sectors is the mis-allocation of aid spending towards security objectives, with the willing participation of INGOs, the UN and for-profits. The evidence is clear from Iraq and Afghanistan (and other smaller, lower profile examples) that when one funds development projects for security objectives, one achieves neither development nor security. Are we going to learn the lessons from the past, or enter into Faustian Pacts all over again in Syria?

A Pact with the Devil (a deal with the Devil or a Faustian bargain), is an agreement with Evil, in the form of the Devil, often (as in the story of Faust) with the paradoxical intention of achieving a higher Good that is otherwise obstructed. The nature of an agreement is a risky accommodation, so at the crux of objections to such a thing are questions–what has the person making the agreement traded to the Devil; can the person avoid being trapped or corrupted; does the agreement strengthen the Devil; is the greater Good compromised, and still unachievable? 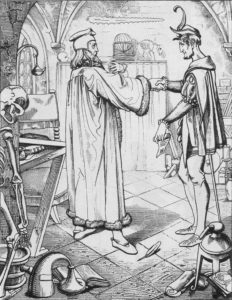 Faust’s pact with Mephisto (about 1840), by Julius Nisle.

These failures are expensive. As this report from 2013 describes, the situation was no better in Iraq (noting this was written before the advent of ISIL/ISIS) and evaluates the wastage at US$60b. When wastage is rounded off to the nearest billion, AND there is barely any improvement in development AND the security situation is demonstratively worse, tax-payers would be forgiven for succumbing to populist appeals to slash aid budgets. And it is now 2017 – those numbers would be much higher by now.

But it did not last, and look at where Syria and Iraq are now. How are INGOs perceived now compared to before 2003? To paraphase Sarah Palin, ‘How’s that impartiality and neutrality stuff going?‘

With the benefit of hindsight it is easy to criticise the organisations responsible for taking the money and tipping so much fuel onto the fires of Afghanistan and Iraq. But now we know better. As a result of poor risk assessments, poor planning and greed, the sector has a serious credibility crisis. Concepts of neutrality and impartiality are almost gone and now we must think ahead to how donors will understand the problem in Syria. What will belligerent donor governments do next? How much will they spend?

Why do major donor governments do this, and what does this mean for the rest of us?

Governments – or at least the well-intentioned apparatchiks working within them – are not malicious. They honestly believe a ‘Whole of Government’ or ‘Comprehensive Approach’ to complex problems  will reduce duplication, provide clearer policy formation and result in a higher impact. Better ‘bang for the buck’. And because fewer and fewer OECD governments actually do anything, much of the implementation for the aid component is outsourced to for-profit or not-for-profit humanitarian and development organisations. In their minds it is a clear win-win. So we can’t always just blame the bureaucrats and let off the hook the seasoned veterans in the humanitarian and development sectors who willingly went along with it.

The result is a dramatic contraction of humanitarian space. As Laurent Saillard argues well;

Most NGOs and UN agencies forgot or refused to even consider that they were in fact actively participating in the implementation of the Counter-Insurgency Strategy supported by the coalition, and that this could be the main cause of the increasing challenges their were facing. It was easier to blame armed actors for their involvement in activities traditionally implemented by aid agencies than to look critically at what the aid community had become in the Afghan context. The underlying issue had in fact little to do with the involvement of armed actors in aid delivery. On the contrary, it was the new role of the aid community and its ambiguous – not to say schizophrenic – behaviour that were responsible for how humanitarian actors in the country were now being perceived.

Don’t misunderstand me – not every donor inspired project in a complex environment is necessarily a [very] slow motion train wreck waiting to happen. There is wheat among the chaff and it is here and at this point that INGO/UN/Development organisation staff, staff families, the general public, private donors and above all beneficiaries need to retain their faith in the senior leadership group of their organisation to approach the ‘funding opportunity’ carefully.

Before committing the organisation to its next extended period of safe rooms, HEAT trainings, car-bombs, burn-out and organisational reputation shredding, the board and senior management must ask themselves a few questions. Among many others:

*Specific – target a specific area for improvement.
Measurable – quantify or at least suggest an indicator of progress.
Achievable – state what results can realistically be achieved, given available resources.
Responsible – specify who will do it.
Time-related – specify when the result(s) can be achieved.

With aid budgets everywhere under ever more scrutiny, and the politics within donor nations moving towards populism, the ‘Aid Industry’, or the ‘Aid-Industrial Complex’ must look deep within itself to maintain its popular legitimacy and viability. Humanitarian and development professionals can no longer rely upon a steady stream of funding for a sector that is supposed to be working towards its own redundancy. It clearly isn’t.

Secondly, it is a matter of time that the situation will evolve in Syria so that it will be considered safe enough for the larger INGOs and UN Agencies to set up offices, locate expat staff there full time, and throw themselves into the humanitarian, development, economic, cultural and environmental catastrophe that is Syria. We all wish them and the Syrian people well in what will be a long and challenging task. The bulk of the millions they will be receiving will be donor funds from the usual donor nations and multi-lateral organisations with an eye to political outcomes associated with mass migration and terrorism. We know this.

This is not necessarily a bad thing. Organisations need to start preparing for the inevitable Faustian Pact now in order to be ready for the quick risk assessments that must be conducted prior to accepting donor funds from belligerent nations in Syria. SMART, once again:

Many projects will be well designed and employ donor funds to unambiguously work with host communities to rebuild shattered lives. The Projects will be SMART, be preceded by comprehensive Risk Assessments with Mission, Mandate and Values at the core, and have a defined end-point. Others will not.

We hope the senior management of government donor organisations learn from recent history and resist the clarion call for ‘Whole of Government’ responses this time around. And if they fail we entrust the senior leadership of the larger humanitarian and development organisations to approach ‘opportunities’ to ‘fill the pipeline’ in Syria with a Risk Management approach. Millions depend on you to get it right.

0 Shares Share
0
Travel Safety and Duty of Care, Updates from the Field No Comments